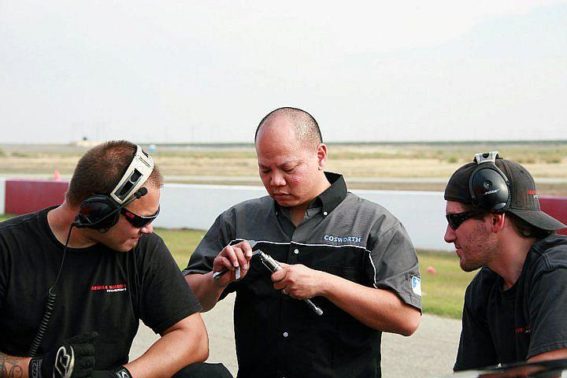 Today we talk with the brains behind the horsepower in the Sierra Sierra Evo Lancer, Eric Hsu. The man they call “HP” has a long history in the Japanese tuning scene in the United States.

For many years he was the chief engineer at Apexi and was instrumental in bringing this brand to the US market in the nineties. He also headed up XS engineering where he not only tuned many famous vehicles of the day but also built the infamous XS R32 GTR that featured in a reality TV show and is a car he still owns to this day.

These days Eric heads up the  performance parts product development section of Cosworth Engineering in the USA  and is also employed by Sierra Sierra but his position as “head tuner and track support engineer” goes much further than just a job.

You see Eric, like the rest of this team at Sierra Sierra (SSE) have the absolutely relentless need to have the fastest time attack car in the world bar none and that is what they are out to achieve here in August. We caught up with him this week as he and the rest of the team are getting prepared to come down under.

Superlap Australia: G’day Eric, awesome to see you guys are making the big trip down under with the Sierra Sierra team for World Time Attack again, so how are you guys looking?

Eric Hsu: Things are a bit more rushed than last year. SSE has been busy with the Ferrari Challenge season. So much so that our Glorious Leader almost decided to axe the trip to Australia because there wasn’t enough time to concentrate on Christine. Given the huge expense to bring the team and car over, he wasn’t too sure about the “chances of winning vs. dollars invested” ratio.

Luckily Emp, myself, and the guys at hiOctanedirect.com, Turbosmart, Royal Purple, Hankook, Okada Projects, BorgWarner and of course Cosworth came through with some support to help reduce the cost of competing the EVO at WTAC. Naturally, with this level of support, GL would be interested again. Who doesn’t want a good deal?

Anyhow, so with this decision to move forward preparing for WTAC, we just finished a brand new engine at Cosworth that has all the latest and greatest features. It even uses rod bearings from one of Cosworth’s past F1 engines.  At the moment, I’m at Sierra Sierra running in the engine on their chassis dyno and finishing some last minute testing on the new BW EFR turbo (we went up in size). In two days the car heads to Los Angeles to get put into the team USA container and then Christine’s on her way to WTAC 2011. 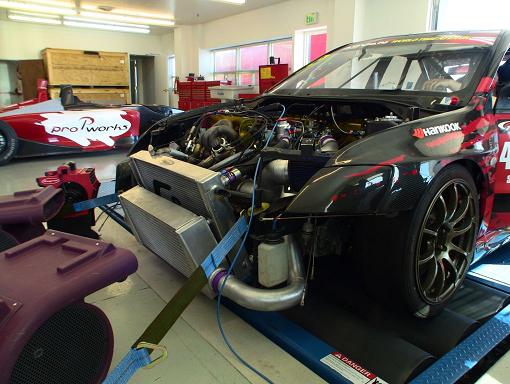 Superlap Australia: And we hear the Sierra Sierra Evo is a lot faster than last year is that correct?

Eric Hsu: After Christine returned from WTAC 2010 last year, Richard (the team manager, engineer and setup genius) found a way to make the car quicker with some of his differential wizardry. Emp was of course asking for more boost and revs all the time so I decided to shut him up and give some to him. Na, but seriously, it was a combination of things that improved the car.

Engine output improved further from Cosworth, the BorgWarner EFR turbo improved turbo performance and reliability, the Turbosmart wastegates improved reliability and Richard’s diff wizardry helped a lot.  Dave is seriously a fast driver and was able to find over 2 seconds at Buttonwillow after returning to from WTAC with the changes He thinks there was a bit more even. 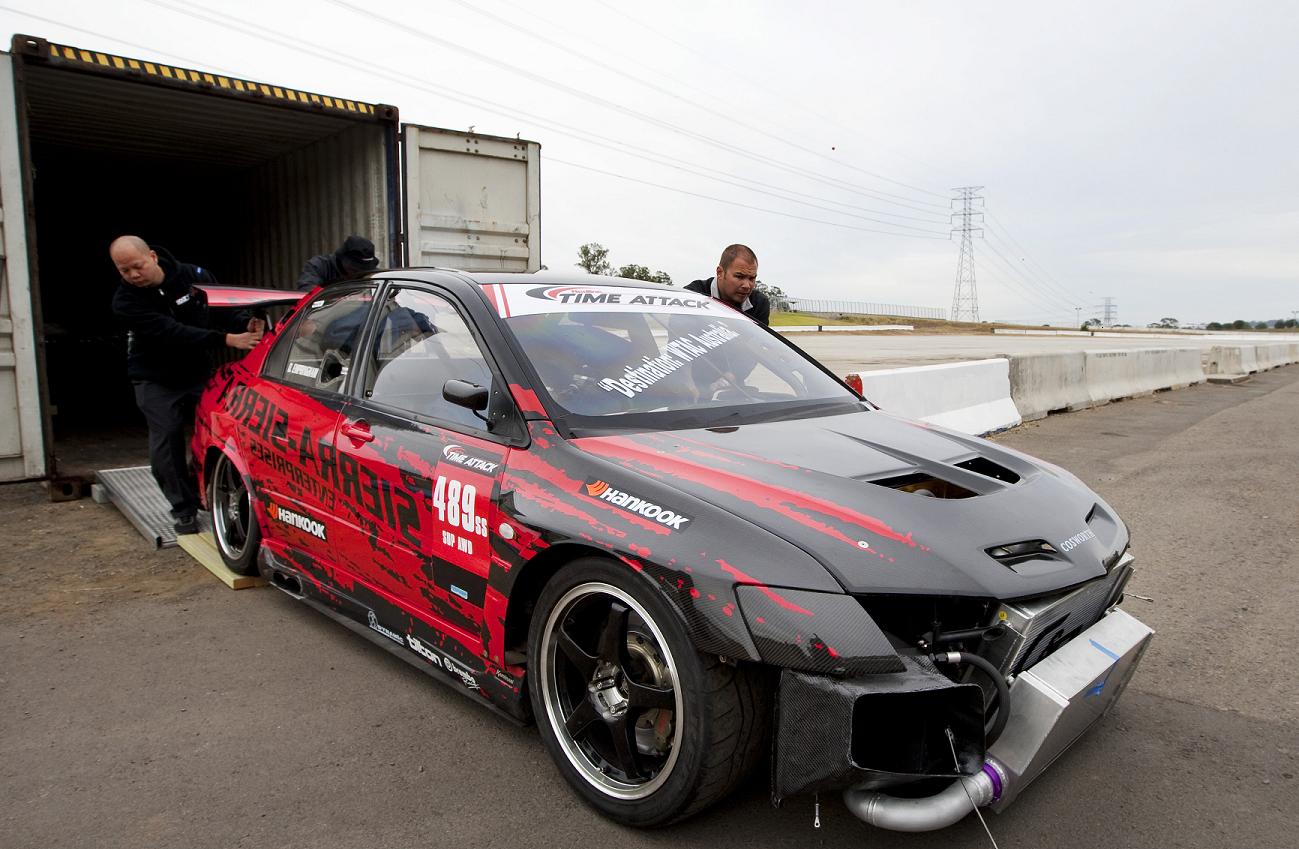 Superlap Australia: So what are the big changes you guys have made since you were here last May?

Eric Hsu: Just recently, the Sierra boys cut out about 800 lbs (363kg) out of the car. This was achieved by cutting out just about every piece of factory frame rail, floor pan, and unnecessary sheet metal. Then they built a whole new suspension designed around WRC tarmac rally uprights and grafted the double A-arm suspension  onto the now virtually tubular chassis.

Finally they replaced every single body panel with dry carbon. On the drivetrain, they added a sequential transmission from Hewland too. But immediately after returning from WTA 2010, the differential changes, more power output from the Cosworth engine and BorgWarner EFR turbo combination, and Emp learning a few more tricks to driving a high strung,  4 cylinder, AWD  turbo car are what made the bulk of the improvements.

More recently, Mike, Jet, Richard, and Pete at Kaminari got crazy with the carbon and made some drastic aero changes (you’ll see when we roll Christine out of the container), Okada Projects set us up with a whole new ignition system, and I’ve made some uhm… how would you explain it… “fundamental” changes to our boost control strategy. These last batch of changes have yet to be tested, but that’s what we’ll need to do in Australia first since we’ve run out of time in the US. BTW, I’m kidding about the 800 lbs., but if you didn’t catch it, I described the Garage Revolution FD3S RX-7. 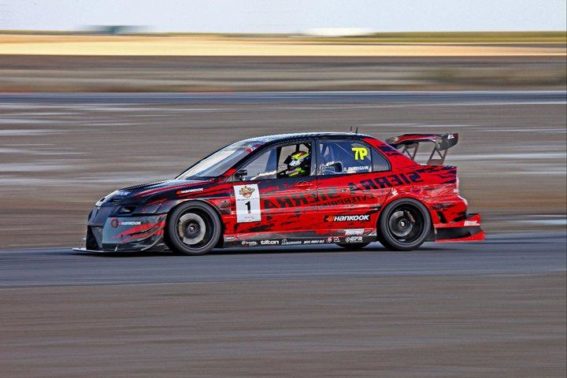 Superlap Australia: And you guys were involved in the development of the EFR turbo too is that correct?

Eric Hsu: Yes. Cosworth was one of BorgWarner’s development partners. The product development team at Cosworth was testing prototype EFRs on various engines from mid-2010. Being the engine supplier to Sierra Sierra, it was natural for us to connect BorgWarner and SSE upon Christine’s return from Australia. Christine would not only be a test bed, but also a proving ground for the EFR turbo.

If you’ve followed the SSE EVO, then you know that we used to grenade turbos regularly. Switching over to the EFR turbo improved the turbo reliability situation drastically. Coupled with the Full Race exhaust manifold, the EFR also reduced lag, improved boost response, and made more horsepower all at the same time. Thanks to BorgWarner, turbo concerns are a thing of the past. 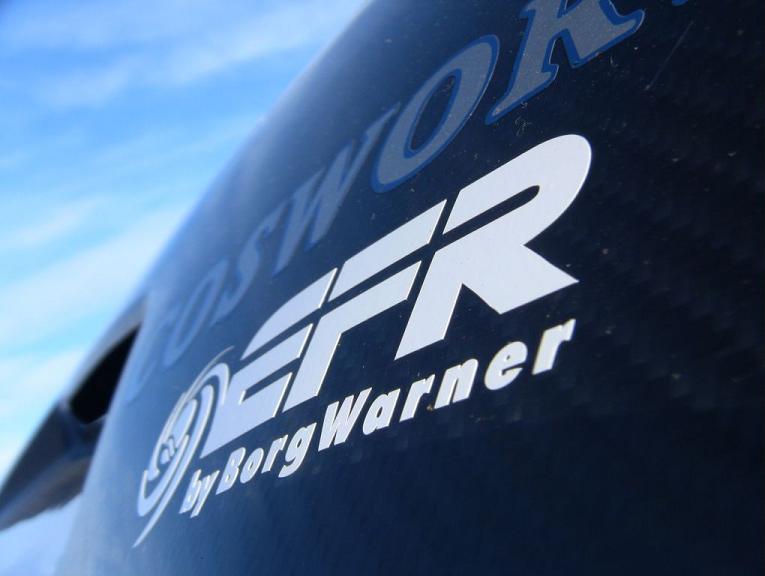 Superlap Australia: And what about Cosworth are they involved in many other time attack cars in the USA? I see they have supplied some parts to GST?

Eric Hsu: In the US, most serious club racers, track day enthusiasts, and some forms of GT race cars that are Subarus, EVOs, 350Zs, or GT-Rs use our parts. Likewise, plenty of serious time attack cars use our parts. We’ve worked with GST for many years now and supply them with some components too.

They don’t use all Cosworth components in their engines, but they pick and choose what they want. We like working with GST because they are always at the events no matter how much they had to work to get there. They also provide us with valuable feedback that allows us to make our products better. 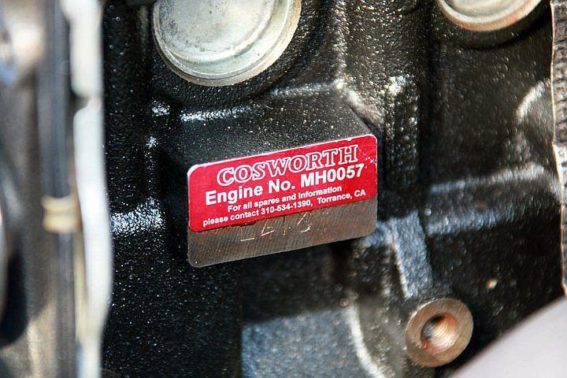 Superlap Australia: And what about the rest of the world? We are certainly seeing more and more Cosworth parts turning up on cars in Australia with quite a few of our entries even running full Cosworth built engines.

Eric Hsu: The great thing about a weak US dollar is that it makes anything from the US more affordable for everybody else! Cosworth parts are now available in Australia at All Star Garage, HiOctane Direct.com, Tuspeed and a few others. These companies  all stock and order Cosworth parts regularly which is great for customers who don’t want to deal with customs, shipping, money transfers, or getting jacked on eBay.

This year I’ll be coming to WTA 2011 with Tyler who is another Cosworth engineer. We are planning to visit customers and potential customers in other states and check out the Aussie market for ourselves. The way I see it, the more customers Cosworth has in Australia, the more excuses I have to come every year!

Aside from that, we’re also coming to scope out the Prep’d Motorsport Lotus Elise. There’s been talk within the Cosworth USA engineering department to develop Elise parts and to build the ultimate Time Attack Elise. 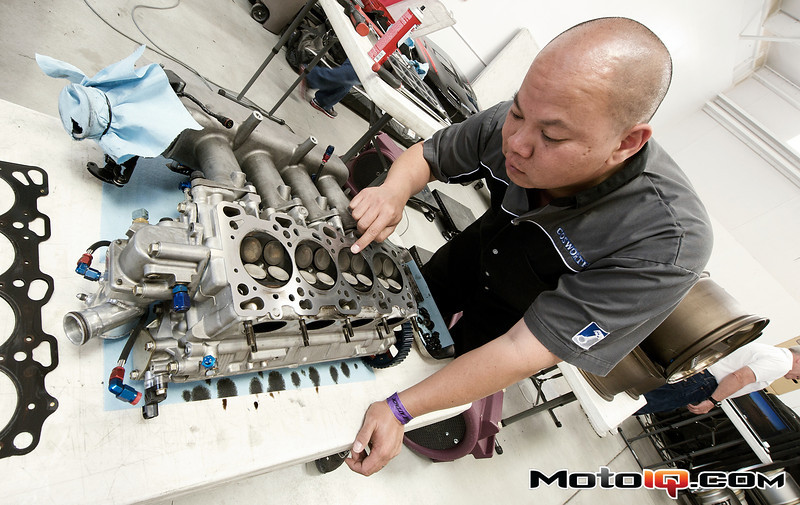 Superlap Australia: Awesome Eric thanks for your time. Last year the Sierra Sierra car was an absolute crowd favourite and I am sure this year will be no different. We look forward to seeing you guys at the creek in August.

Eric Hsu: Yep, I can’t wait for the event. Aside from competing in the event, the World Time Attack Challenge is the best Time Attack event I have ever been to. While I haven’t been to any in the UK, they don’t have all of the world renowned Time Attack cars in one place, on the same track, on the same day trying to smoke the crap out of each other.

Being in the heat of that kind of competition is just plain awesome. WTAC is a really special event. Everybody’s friendly, you’re surrounded by ultra fast turbo cars, and Sydney is an awesome city with plenty to do. Plus Aussie beer is pretty damn good too.  I always tell people to take a vacation and make it to Sydney during the WTAC so they don’t miss the event of the year. See you guys soon!