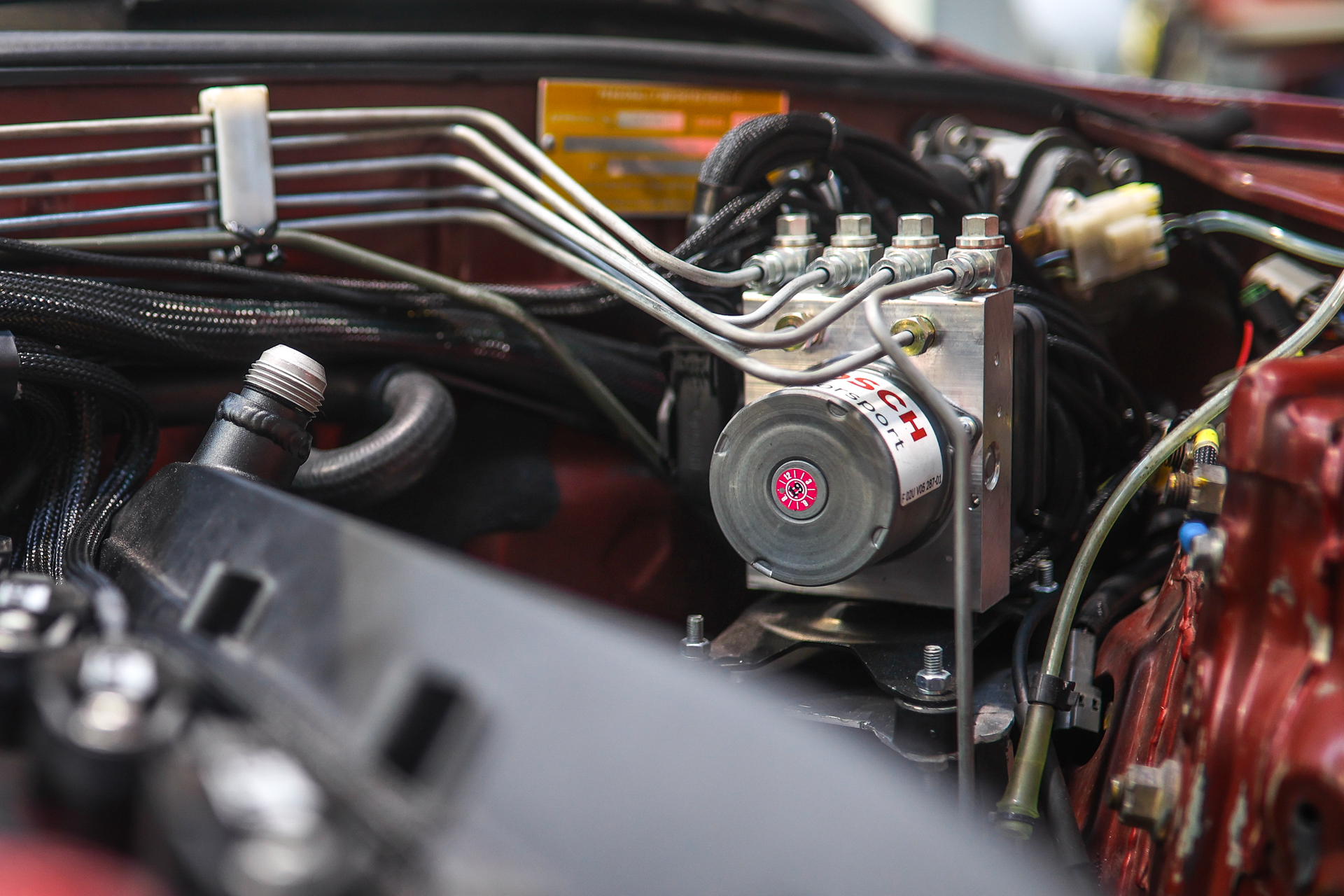 In professional motorsport categories world-wide, motorsport ABS has become a ‘must have’ technology for those serious about winning where rules permit. Unlike engine tuning and suspension setup where substantial established knowledge exists and is readily accessible in the public domain, the inner workings of ABS (Anti-lock Braking System) is still largely a mystery for many and myths and misconceptions abound. Bosch held the original patent for road car ABS, and has led the development of the technology in both road and race applications and uniquely understands the problems faced when turning a standard production road car into a weapon for single-lap pace. We have prepared this article to shed some light on the topic and hopefully dispel a few myths along the way. As any experienced racer knows, braking is what often separates the good drivers from the great. When working correctly, ABS inspires confidence and enables a driver to explore the limits of their car’s braking potential, enabling later braking, higher corner entry speeds and faster lap times. Modern production car ABS is so effective on unmodified road cars because it has been finely tuned to the particular make and model and its corresponding weight, chassis, suspension, wheel, tyre, master cylinder and brake combination. When production cars are modified for the race track, the finely tuned ABS settings no longer match the new setup and the ABS typically underperforms. Many drivers throw the system away at that point as brake pedal feel and stopping performance can become inconsistent. But ABS that is working correctly is consistent and reliable and allows a driver to push harder and faster to discover the limits of their racecar’s potential. We find drivers are often surprised at what their car is capable of when they run Motorsport ABS and dial it in correctly. Jamal “Jimmy” Assad is an experienced World Time Attack Challenge competitor who knows what Motorsport ABS can bring to a vehicle’s single-lap pace.

“If we’re going to different events that have  weather changes, like rally sprint, time attack, sometimes it’s raining. I know I can adjust braking via the dial. It’s really worked. We came first at the Whiteline Rally Sprint in December and it was because I could just dial the car in at different places, different track conditions, whether it’s a bit slippery or dry, it’s just awesome. I can dial it in and that’s the best thing about it as a driver.” Jimmy said.

Jimmy’s standout observation was how much confidence was instilled in braking after the Motorsport ABS installation. The ability to dial the ABS level up or down on-the-fly, depending on the track conditions gave him huge confidence.

“It’s awesome. I can feel the pedal, the braking points are much further in, I can get on the gas early, trail-brake a lot, left foot braking is much more predictable. I’m so much more confident in the brakes. I feel safer, I feel faster, and I know I can stop.”

Why won’t standard ABS work correctly in a race car?

When a standard production car is stripped out to become substantially lighter, then fitted with wider and stickier tyres, bigger rotors and improved callipers for racing, its maximum possible deceleration and braking potential overall can be improved significantly. Camber changes and altered spring or damping rates will change the tyres’ contact patch on the road and how well they follow bumps. The problem with all this is that the software settings in the ABS unit are no longer matched after such modifications to the car and cannot be modified to suit.

This mismatch often reveals itself as ABS intervening sooner than it needs to, relieving brake pressure and thus reducing the overall effect of braking. The worst-case scenario is an extreme release of brake pressure to the calipers despite maximum driver braking input, as the system is being asked to operate outside of its factory programmed parameters.

Furthermore, ABS systems from the 1970’s through 2000’s were dependent on the technology of the time – two or three channel systems are severely outdated but even relatively modern four channel systems can benefit from the improvements to sensor accuracy, ECU processing capability and actuator speed found in Bosch’s current M5 Motorsport ABS system. ABS software is tuned to provide a balance between deceleration and stability. It allows the right amount of brake pressure through to the callipers of each wheel for the available individual tyre grip at any point in time to achieve the best combination of stopping performance and controllability. A skidding tyre has very little grip in any direction, which means not only is its braking effect enormously reduced but so too is steering control. The magic of ABS when working correctly is that the driver can use the system to give high stopping performance and an assurance of steering control even if they brake too late or jump on the pedal too hard. This ability to maintain steering control on the limit of adhesion gives a driver the confidence to push hard, try different lines and techniques and really explore the potential of their car, all whilst having peace of mind that they won’t cook a set of tyres in the process. Without ABS, a driver must modulate braking pressure to accommodate for the tyre with the highest propensity to lock – meaning three wheels are working below their maximum potential. ABS modulates each wheel individually to its limit while maintaining controllability.

To summarise, ABS that is NOT working correctly can result in unreliable braking performance, inconsistent pedal feel and leave a driver less inclined to explore the extreme limits of their vehicle’s performance. Bosch Motorsport has a powerful ABS system that is configurable to the individual build specification of the car and has a 12-position switch to allow a driver to dial in varying degrees of ABS intervention. Depending on track conditions, the weather, tyre type and condition and confidence level, a driver can adjust on-the-fly how much ABS intervention the system will provide. Cold tyres, wet surface or unfamiliar with the circuit? You may opt for more intervention. Dry track, warm tyres and feeling confident? Dial some out.

Whilst Motorsport ABS is no substitute for a poor brake system, bad tyres or an unskilled driver and will not defy the laws of physics if you massively overcook it into a corner, it will allow you to get the most out of your race car every time you hit the brake pedal. More good news is that Motorsport ABS can be fitted to almost any car; it can run either as a stand-alone system, suitable for many older cars or, via its CAN communication capability, be integrated with other electronic systems found in later model vehicles or custom-built race cars.

Bosch Motorsport ABS gives you the braking capability equivalent to the highest calibre drivers but with four feet and four individual brake pedals. Even the best drivers can go faster with a well-tuned ABS.

Bosch Motorsport M5 ABS units are available in a highly capable Clubsport and fully-featured Standard kit via Authorised Bosch Motorsport dealers. Each installation is different, so we recommend a consultation with our expert dealers to understand which kit is best for you, and any supporting modifications that may be required. To find your nearest dealer, visit Authorized Dealers | Bosch Motorsport (bosch-motorsport.com).

ONLY DAYS to go! Don’t miss out – get your tickets today!