Time flies when you’re having fun, and the last ten years of World Time Attack Challenge at Sydney Motorsport Park are definitely no exception. Times have been flying as we keep breaking not only our event record, but edge ourselves closer to outright track record glory! Read the WTAC 2019 number crunch here. As we prepare for our milestone 10th event at Eastern Creek, we’ve asked our CEO, Ian Baker, to count down his top ten most memorable moments from the last decade! Read on…

This was a duel of epic proportions that ultimately became the catalyst for the level of competition at WTAC we know today. It started in 2010 when the then fastest time attack car in North America, the Sierra Sierra Evo (driven by former Indy Car driver David Empringham), made the trip down under to go head to head with the mighty Cyber Evo out of Japan (piloted by legendary Japanese wheelman Tarzan Yamada). The 2010 victory went to the Japanese Cyber team and both teams returned in 2011 with much more developed machinery for a second round. It went down to the dying stages of the event with both teams battling mechanical gremlins to see the Japanese Cyber team just snatch the victory by a mere .15 seconds in a nail-biting climax to the event. 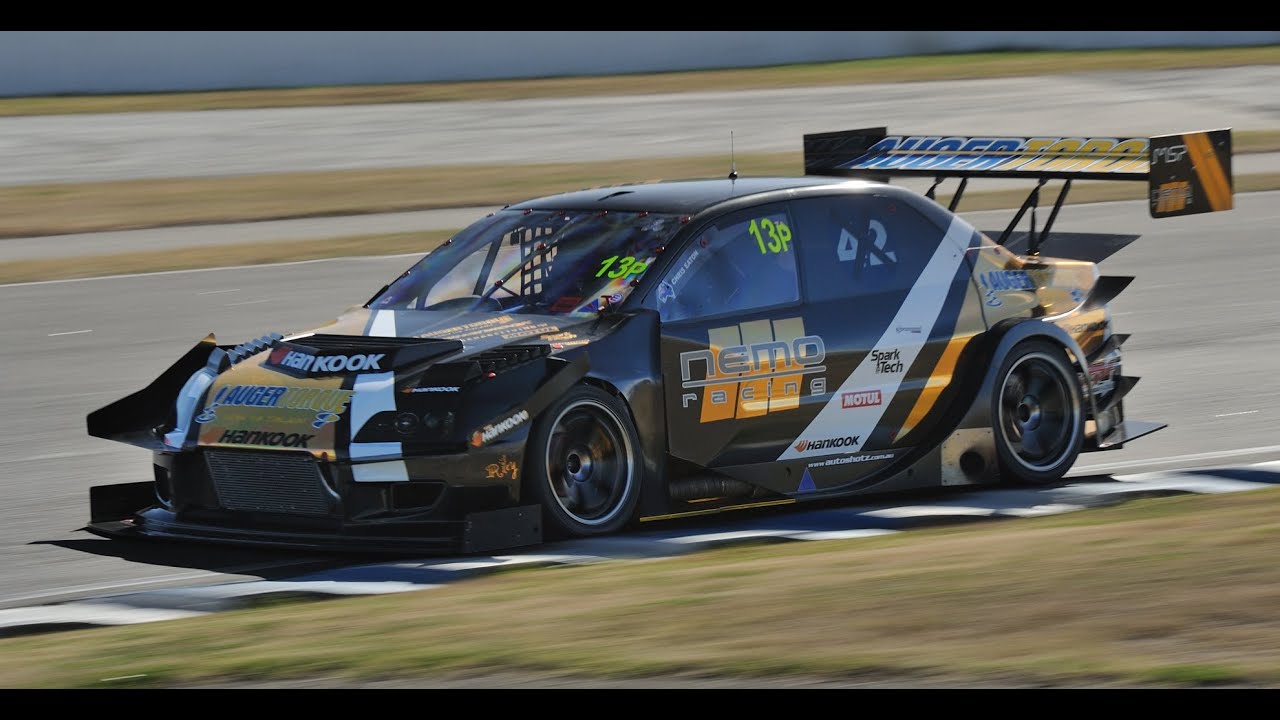 In 2012, a much-anticipated car appeared out of Queensland known as NEMO. The insane build polarised the time-attack community with many claiming it was way beyond the ‘spirit of time attack’ and many others stating it was ‘the future of time attack’. Regardless of opinions, there was no doubting the reality that overcast Friday morning when V8 Supercars ace Warren Luff stopped the clocks almost four seconds faster than any previous year and two seconds ahead of the runner-up Tilton team. This car changed the face of time attack forever, albeit surrounded by a sea of controversy… Sadly, it disappeared as quickly as it entered, but there is no denying the ground-up design around aerodynamics and full carbon construction it was a game-changer

A chance meeting with Pagani executives in Sydney one morning eventuated with the shipping of an ultra-rare and super-expensive Pagani Huyara BC to our 2016 event for our special guest, Japanese racing legend Keiichi Tsuchiya, to punt around doing some ‘spirited’ demonstration laps. This was unquestionably a hero car that our punters would never have a chance to see in person, driven by one of Japan’s cult heroes. A special moment indeed.

These days Mad Mike is a household name around the globe but back in 2011, he was just starting out his professional drift career and still working days as a signwriter in Auckland, New Zealand. After returning from a year in Formula Drift in 2010, we managed to secure his insane NA quad-rotor Mazda RX-7. The sights and sounds of this car to the unsuspecting public were mind-blowing. With an ear-shredding, F1-style sound and 10-foot flames being shot out of the back on every gear change, it truly was a spectacle beyond words as the sun went down and we kicked off our first International Drift Challenge.

The popularity of the car was clearly evident from the moment we announced it – within minutes it crashed our website. We upgraded the server and it crashed again! Once we saw and heard the car in person, it was clear why this happened. This car is truly an icon and has an aura and sound all of its own. So many fans personally thanked me for making their dreams come true and not long after, this the car suffered a major crash at the Goodwood Festival of Speed. As a gesture of goodwill, we bought the car back over in 2017 again for Hoshino-san the owner and our fans.

While all the other memories are more focused on moments in time, this one is more about the rapid advancement of the front-wheel-drive platforms across all classes. I have to begin with the Open Class entry of JDMYard, a Honda Civic driven by Adam Casmiri, who has snatched victory in 2015, 2017 and 2018 from more heavily backed teams and professional drivers. The BYP-backed Honda Civic driven by Daniel Meredith took Clubsprint victory in 2015 and 2016, and crowd-favourite Rob Nguyen taking Pro Am honours in 2017 in the infamous Mighty Mouse CRX. Special mention also to William Au-Yeung who has made the long trip out from Canada to take home the runner-up trophy twice in Pro Am.

There is no denying Tilton team owner Kostinken Pohorukov’s love of the sport of time-attack racing. When this team swept the floor with the competition over three straight years before announcing their retirement from the sport, it really was the stuff of dreams for driver Garth Walden and the rest of the close-knit team. Starting in 2013 with a 1:24.85 and culminating in 2015 with a 1:23.7, the team not only outdid themselves but the whole field in those three years. The car returned to competition in 2018 with Kosta at the wheel in Pro Am and once again stamped their authority with a class win and record to boot, but unfortunately ended their day in a nasty crash. Luckily, Kosta suffered only minor injuries and the team will be back in 2019… but more on that later!

There is no denying that Murray Coote knows his way around a race car, and what he lacks in outright budget he makes up for in serious knowledge and outright ability. The MCA team have competed since 2011 in the WTAC Pro Class with some serious wheelmen including two-time Le Mans winner Earl Bamber and V8 Supercar ace Shane Van Gisbergen. It was not until 2016 when Tim Slade was handed the reigns to a radically updated Version 2.0 carbon-fibre ‘Hammerhead’ S13 Silvia that the team could finally stand on that top step of the podium. It was an emotionally-charged day for the small Queensland-based family team, and they successfully managed to defend their title in 2017 once again with Slade driving.

The way the 2014 event played out in the dying minutes of the Pro Class shootout is the kind of stuff you can only ever dream about as a motorsport fan. Crowd favourite Under Suzuki goes into the Superlap Shootout in the number one position, leading V8 Supercar legend Shane Van Gisbergen in the MCA Silvia. This lead was short-lived as Garth Walden in the Tilton Interiors Evo screamed home with a 1:24.8412 putting it 0.0388 seconds in front of Under Suzuki’s machine and ultimately pushing Van Gisbergen to third, giving Tilton their second outright win on the trot. Under Suzuki certainly cemented his name as time-attack royalty on that late afternoon and he has still relentlessly pursued that elusive win, year after year.

From its inception, the RP968 Porsche always was built to a level we had never seen in the this country, nor perhaps the world – at least in the time-attack community anyway. Designed from the ground-up around aerodynamics by a top ex-Formula 1 designer, constructed using the latest technologies, driven by ultra-experienced GT driver, Barton Mawer, and supported by a professional-level race team, the brainchild of Rod Pobestek was always bound to break the record at some stage. It wasn’t until the team installed a full billet four-litre ‘Thor’ engine from Elmer Racing in Finland that the team smashed into the sub-twenties. To put that into perspective, that’s over a full second faster than anyone at WTAC, ever, and only seven tenths off the outright lap record held by current Renault F1 driver, Nico Hulkenberg, in a A1GP car. So without question, this is my number one memory to date!!!

When it comes to cool, you don’t get much cooler than a drift Lamborghini Murcielago and Daigo is certainly the King of Cool in the world of drifting.

The insane PMQ Evo of Mick Sigsworth won four Pro Am titles back-to-back. Aside from the performance, this car lifted the bar on vehicle presentation and craftsmanship, looking more like a factory build than something crafted in a guys shed in Brisbane.

It is hard enough to get a WTAC podium once but a few guys have stood on the podium several time often in multiple classes they include:

This car was a lesson in ‘how to do it properly’ with Taniguchi-san commenting how he would love to buy this car after inspecting it for the first time. A couple of years later we organised for him to drive it in Pro Class.

This was a clash of the Japanese tuner behemoths with Nob driving for HKS and Tarzan driving for Top Secret in R35 GTRs which back in 2014 were still fairly new and relevant to the tuning scene. It was a JDM fanboys dream come true.

World Record for Number of Girls in a Kombi

No words. Here’s a video!

Come and celebrate the 10th year of WTAC at Sydney Motorsport Park on October 18-19 2019. Tickets on sale NOW! Buy your tickets here: http://worldtimeattack.com/index.php/buy-2019-wtac-tickets/

For any more information about the event or how to get involved, email marketing@worldtimeattack.com